Case Study: 3M listens to ideas on how to use the Post-it 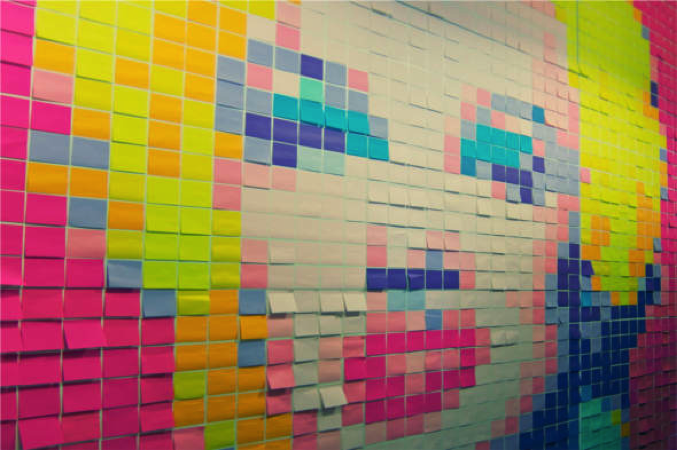 When Joe invited me to collaborate on this book [E-X-I-T-O], I immediately sensed its true inclination for underscoring the benefits –still unknown in their highest form in our day- of digital marketing and its scope. During my career and the projects on which I have collaborated, perhaps this case is the best example in which creative ideas, a great brand experience and the realization of sales goals combine in such a functional way as with My Post-it Mural, also achieving high expectations and loyalty to the brand via the use of detailed search methods, social media, e-mail, and through evaluations and reviews.

As E-Hub Manager for Latin America (Digital Head for Latin America), I observed, since 2011, how 3M’s Consumer and Office Business seeks ways to boost users’ experience with consumer brands (Post-it, Nexcare, Scotch Brite, Scotch, Futuro and Command) in its digital platforms and thus maximize its online presence. The Latin America Team, based in Mexico, started to develop these opportunities through projects that involve different digital tools for the user and that manage to coincide with the business strategy for each of these brands. Post-it is one of the brands with great potential, given that the target group that uses social networks and the Internet is larger.

The number of Internet users in Mexico grew 14% since 2010, reaching 42 million users; this makes the country one of the main markets with the fastest growth rate in the world. Of these 42 million, 24% are young people between 17 and 24 years of age, and this segment of the population is the one we were looking to impact in order to maintain and grow the brand’s medium- and long-term prospects in the future through the My Post-it Mural promotion, while we also hoped to expand the use of digital tools in less active populations on social media, such as stay-at-home moms. This promotion has always had a commercial tone, but it also seeks to contribute to increasing worldwide use of digital marketing.

Looking back, in 1968 Spencer Silver, a 3M researcher, was searching for a new powerful adhesive, but he only found one that stuck lightly and it was of no use to him. Six years later, a man [Art Fry] was in a church, trying to read some psalms marked in his book. Impossible. The scraps of paper continuously fell to the floor until it occurred to him to glue the bookmarks to the pages with the glue that Spencer Silver invented. The next day, Fry made a first unsuccessful attempt, but he kept trying and one day, he gave a book to his boss in which he had stuck one of his bookmarks. When he returned it to him, the boss had written something on that first Post-it note that he later offered as an idea to the 3M company, where he worked. It was not easy; yes, they assigned a team to help him perfect the Post-it, but the then executives did not see it as a business; nevertheless, Art Fry noticed that his colleagues asked him for them more frequently, and in the end, following an ample advertising campaign, it was a genuine success. In 1980, Post-it Notes were already being used throughout the United States, and a year later, they arrived in Europe. Today, they are indispensable in offices.

Post-it was born more than 30 years ago as an adhesive note that fulfills the roles of a reminder, a notepad or a to-do list, eliminating the mental distraction stirred up by thinking about an unfinished idea or a pending activity; poetically speaking, Post-it frees the human mind. With the purpose of highlighting the space where it is placed, its colors are bright; in addition, they can be stuck and unstuck to any surface several times.

Need to Express Creativity and Ideas

In order to listen to the communities, we conducted research in social networks with tools like uberVU and Radian6 in order to find out what they were saying about the Post-it War[2] in European countries and we found things from a car, a fully decorated bedroom to the portrait of Steve Jobs, founder and CEO of Apple, in one of the window displays of a Mac Store as a posthumous tribute.

After finding events related to the brand around the world, we saw that the need to express creativity and ideas is a trend that went beyond the population to which the brand was exclusively talking. 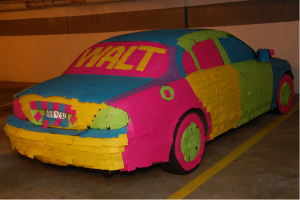 Source: Photo from Per Karlsson (Flickr). Reproduced with permission.

Post-it Uses Outside the Office

Today, Post-it Notes are used to express ideas, including outside of the office, as an artistic or decorative element. An anecdote in which the neighbor filled her boyfriend’s car with Post-it Note messages reading “I love you” is not foreign to anyone in our day and age, and this is just one example. Several contemporary artists, both in art galleries, as well as in the streets of the major cities in the world, create complete graphic arts projects using Post-it Notes as the raw material and, in such activities, the brand was not involved. Therefore, we wanted to reach that population, so active in the use of the brand both as an artistic raw material, as well as in social media, in a more creative way, complementing the previous strategy of communication that was focused on offices, jobs and executives.

With this information and what we know about the brand in Latin America, we took on the challenge of generating greater consumer engagement with experiences related to the products; to do this, we created the app mentioned as part of the My Post-it Mural promotion, which is found on the official Post-it Mexico page. The result has been fairly promising.

With regard to marketing, the challenge within the company was to overcome the obstacle of getting a budget and being able to create a tool that could also be used in other countries. Through the metrics that emerged from the tool, I was able to demonstrate that digital activities impact the business variables of the company, as well as the potential to bring a digital strategy to the real world and have the possibility of reaching diverse communities, including those offline.

From the strong peak in the category of adhesive notes, different brands started to emerge at points of sale, imitating what Post-it was offering. The main reason that someone opts for any brand at the point of sale is the price, even though factors like range of distribution in and of itself can affect the loyalty a consumer has for a product. In this sense, the user experience that the My Post-it Mural contest represented would be decisive and could be summarized in the following steps.

With regard to the brand experience that both the Post-it webpage and social media offer, we started to see that two-thirds of consumers start their process online, and they not only search for products, but they participate, they ask questions to other participants in social networks, they want to know about what their friends like, as well as to know the different options they might find interacting in different ways and expressing ideas of all types.

The app is a widget included in an iframe within the official webpage (www.post-it.com.mx) and is linked to the brand’s registration forms so that by participating in the creation of a mural, the user is incorporated into the brand’s database. The interaction one has with the app increased client loyalty in just the first two months of this app on the website; moreover, we connected this experience to Facebook, since on the brand’s webpage there is an extension of the My Post-it Mural widget, but with a user experience more akin to social networks, as this one only allows interaction with Post-it adhesive notes to write text.

We obtained data from the following tables: 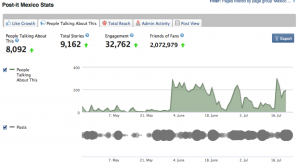 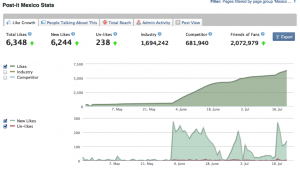 This Post-it Project allows for a boost in the level of bonding between the brand and the consumer, offering the client innovative experiences in navigation and interaction with the platform. Post-it has always been on the minds of people, who now use these notes to give free rein to their creativity, developing murals on windows and walls. The Post-it widget allows mapping of this experience online as a guide to develop it offline. Consumers can participate in an offer to win one of four trips (Las Vegas, Houston, Cancun or Baja California) or iPads and iPods. They will be able to live the Post-it experience and share it with their friends on social networks so that they can receive votes.

The project was also presented in another five Latin American countries, and in England and Australia for its replication and regionalization, both as the company’s “Best Practice”, as well as a digital marketing strategy. 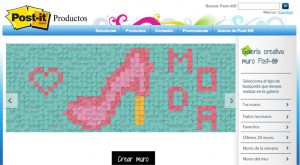 Being a global brand, interaction with the brand’s representatives in different countries is constant. When we released the project in Mexico, the project presentation was done, and other countries immediately saw the potential that it had to increase interaction with users and therefore reduce the fluctuation in purchasing rates, which is too high on all consumer pages. Thus, countries were making requests based on their budgets and implementation times in order to replicate the project from Mexico.

It is worth noting that all of the initiatives that the 3M digital team carries out are based on consumer studies and research tools, like Radian6 [Salesforce], uberVU or Adobe/Omniture, among others. For us, thanks to this project, we managed to learn about our consumers, their online trends and activities, as well as become familiar with challenges that were presented within the company in terms of development with teams from other countries and budget constraints. We were able to integrate several digital channels and we will continue developing projects like this one for the rest of 3M’s consumer brands.

[1] Text and photo of the author of this case study included with permission from Carlos Espíndola.

[2] “Post-it War is a movement [originating in France] that came about when employees of videogame company Ubisoft Montreuil in París started to decorate their office windows with famous videogame characters, in the purest form of pop culture, with the distinctive feature that all of them were made from colorful Post-it Notes.” http://creatividads.wordpress.com/2011/09/02/post-it-war/