What U.S. Hispanic Publishers and Marketers Can Learn from Spain

Many U.S. Hispanic publishers and e-commerce sites find that when they launch a site in Spanish targeting U.S. Hispanics many Latin Americans find their site for a number of reasons:
1) Their site has been optimized for search and so other Spanish-speakers find the site
2) 136 million consumers read in Spanish online, most of whom live outside of the U.S.
3) Sites in the U.S. and Spain typically feature better-produced content than in Latin America
4) Since there isn’t enough content in Latin America, Internet users find foreign sites in Spanish via search
5) Many U.S. Hispanic sites don’t have a landing page for users outside of the U.S.
6) It really is the World Wide Web

Interestingly, publishers in Spain can teach U.S. Hispanic publishers and e-commerce companies about how to best manage cross-border content consumption and grow audiences internationally. During a recent visit to Spain, I learned what a number of Spain’s interactive publishing leaders had to say.

CROSSING BORDERS TO VISIT BLOG NETWORKS AND ELPAIS.COM
WebLogsSL, a 40-site blog network and blogging consulting company based in Madrid, finds that some of their blogs see up to 30% of their visitors coming from Latin America, especially its technology and parenting blogs, according to Julio Alonso, their CEO and founder. Their auto blogs, on the other hand, see very little international traffic as the car manufacturers produce different models for Latin America than in Spain. Globally, WebLogsSL’s sites receive 13.5 million unique visitors and 56 million page views per month.

Grupo Zeta, a newspaper conglomerate in Spain, sees about up to 20% of its traffic from Latin Americans who have become fans of niche subjects covered on their sites and blogs, according to Luis Rull, the founder of Evento Blog España and Mecus a corporate blogging design, development and hosting consultancy who works with Grupo Zeta.

Medios y Redes, a 10-site blogging network and blogging consultancy based in Madrid, sees up to 20% of its traffic from Latin America. With the help of a few bloggers in Peru, they recently launched Dogguie.com and now see a majority of its visitors to that site coming from Peru. WebLogsSL has also expanded internationally by launching a new division in Brazil with two new sites: MotorPasion Brazil and tRendências.

Interestingly, the reverse can also happen where Latin American sites attract visitors from Spain. Fayerwayer.com, a popular technology blog based in Chile, has built a fan-base of readers in Spain and shows how publishers can conquer new markets virtually, especially with lower labor costs for writers in Latin America. Fayerwayer.com gets over 2 million visits and 3.9 million page views per month and represents the largest site in BetaZeta, a blog network in Chile with 10 sites, 5.6 million visits and over 12 million page views.

While blog networks have grown their niche audiences across the world, the large newspaper sites have also grown their audiences globally. ElPais.es changed its name to ElPais.com in 2007 just as Grupo Prisa, the corporate parent, changed the paper’s tag line to “El Periodico Global en Español” (The global newspaper in Spanish). At the same time, Grupo Prisa opened their largest newspaper site up to become a free site after years of requiring users to pay for it and loosing audience to ElMundo.es. Visitors from Latin America represent over 50% of ElPais.com’s visitors and so ElPais.com launched a version of its site for the Americas in 2009, with ElMundo.es shortly thereafter following suit.

MOVING EDITORIAL OPERATIONS TO LATIN AMERICA = LOWER COSTS
If readers cross borders to consume content and bloggers can build audiences abroad, what does this mean for journalists? Luis Rull sees that fewer and fewer journalists at major newspapers will work in their office. Instead, they will work virtually from home, or writers in Latin America, where labor costs are much cheaper, will replace them. Medios y Redes, for example, pays between one and five Euros per post and up to 20 Euros for a sponsored post. While journalists in Spain cannot support themselves from such a pay scale, in Latin America, it can add up to a decent salary. In the U.S. Hispanic market, AOL Latino, ImpreMedia and Univision all produce content for the U.S. market from Mexico. Televisa of course has been producing TV content for Univision’s U.S. consumers for decades.

While outsourcing editorial is already happening, outsourcing Web development is a few steps ahead. Daniel Rodrigo of Medios y Redes says they outsource their development to Colombia, a trend that Daniel only sees increasing as the media business is forced to cut costs and look for cheaper alternatives. And if a web team speaks English, then they can outsource web development to India where it’s even cheaper than Colombia.

Luis Galan, the Head of eBusiness at ElPais.com and Box.net their ad network, says that freelance journalists will increasingly have 360-degree responsibilities where they each write articles, shoots videos and take photos. In addition, he says that they may offer a pay-to-blog model in the future where ElPais.com would allow influencers to blog on their site as citizen journalists and then promote their entries. While they offer that service for free today, since El Pais is the leading global brand for news in Spanish, Luis wonders how El Pais could sell services around their blogs.

UNIVERSAL VERSUS LOCALIZED SPANISH
Between the Spanish “discovery” of Latin America in the 15th Century and today’s growth of the Spanish-language Internet, the regional differences in Spanish have increased dramatically over the centuries. Even with those differences, millions of Latin Americans visit sites from Spain, which suggests that consumers can overlook a few differences in the Spanish language in exchange for reading helpful, big-picture democratic news and information. More importantly, it points out the need to have a Universal Spanish language online. Don’t most news organizations avoid writing in slang anyway?

Mr. Alonso of WeblogsSL recalls one funny story about how El Mundo reported a bullfight describing a “aparatosa cogida,” or “fatal stabbing” in Spanish from Spain. Unfortunately, that same phrase means “pompous goring” or “pompous f*#king” in Mexico. If you were the editorial director of El Mundo, wouldn’t you at least consider adjusting the Spanish used in your newspaper to make it less sexually offensive to an Internet market, like Mexico, that has more Internet users than Spain? And with a name like “The World,” wouldn’t you hope that the editors would encourage using a universal Spanish?

In addition, he cited The “Concha de Oro” (“Golden Shell” in English) film prize at the San Sebastian (Spain) film festival which provides another potentially offensive example of the differences in Spanish. How do you report who wins a major film prize in Europe when its name means “The Golden Pussy” in Argentina, for example?

Mr. Rodrigo also gave examples of how the Real Academica Española (RAE) is stridently avoiding the English-isms or Spanglish that Mexico and Latin America have easily adopted, especially when it comes to technological terms. For example, RAE translates “CD-ROM” as “cederrón” and “Blue Jeans” as “bluyins” whereas in Mexico they would simply say “CD-ROM” or “Jeans.” Mr. Rodrigo suggested visiting Hoygan.com.es to see some funny examples of mis-spelled Spanish. (“Oigan” is the plural command of “to listen” but in this case its spelled phonetically as “Hoygan.”)

If individual words can be confusing, what about idioms, or slang in phrases? Mr. Rodrigo gave a few examples during a trip he made to Colombia to visit his programming team. Instead of saying “lo siento,” or “I’m sorry,” a few Colombians said “Que pena con usted,” which to him meant “what a pity with you.” Or when he arrived at the airport, they asked him, “Me regalas tu nombre,” or literally “gift me your name,” instead of saying, “Dame tu nombre,” or “Give me your name.”

The slang and idioms of spoken Spanish highlight greater differences between the 22 Spanish-speaking countries than the more formal, written version of the Spanish language. But even newscasters can speak in a formal, spoken Spanish via video. Naysayers of Universal Spanish, such as the language service providers (LSP’s) who translate web sites, say that the Spanish in each country is different. But reading a slightly different version of Spanish is still much easier than reading English online. As such, this points us in the direction of using a Universal Spanish online. Or, at the very least, the Internet just may be the biggest force to linguistically unify the former Spanish empire.

WHAT’S AHEAD FOR THE SPANISH ONLINE?
What does the future hold for Spanish-language media? Mr. Alonso sees combinations of editorial policy and technology that create new products, helping us to relate to and distribute content in new ways. Most media companies today are too focused on content he says. Mr. Rull sees a future with GPS-powered, geo-targeted local content on mobile phones with hyper-niche content.

Mr. Galan thinks that maps will power the next wave of online advertising on HTML pages as well as on mobile applications. By providing local services, sites can better localize their sites. In addition, he says we are in an age of massive disintermediation in the media business. Take a look at Happing.com, Coke’s social network in Spain, which shows how advertisers don’t need media companies as they did before. As such, he sees a future where the relationship between the employee and supervisor will go away and instead the risk will be shared between media, advertising and editorial partners.

In conclusion, during my visit to Spain the attendants at the front desk of the hotels where I stayed were from Latin America. Upon asking them what sites each of them visited regularly, the manager of my hotel in Seville often visited ElDeberDigital.com from his native Bolivia. And the attendant at my hotel in Madrid often visited El Comercio’s site from his native Ecuador.

And here is one of my favorite photos from my trip… 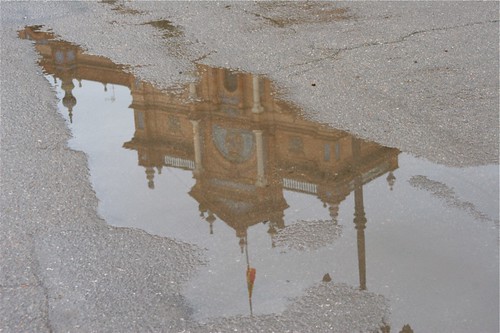