As the English speaking Latino audience grows in size and importance, how can marketers develop culturally relevant promotions for Hispanics? Bernardo Meza, Brand Manager for Wrigley Multicultural Marketing answered that question for me by describing his company’s Vive tu Música with 5 program, which aims to build awareness for 5 gum among bi-cultural Hispanic consumers. Following is our conversation about his work developing the online Latin rock and pop music talent competition.

Why a music promotion?

This music program highlights a very successful approach for Wrigley to engage consumers with the 5 Gum brand in a meaningful and culturally relevant way. 5 Gum is all about stimulating the senses and nothing else does that better than music. After the success of last year’s competition, we wanted to bring Vive tu Música with 5 back and make it even bigger and better this year with the new Vive tu Música with 5 Reality TV Show. 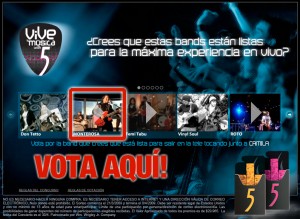 Shares
This is your third year doing Vive tu Música, so clearly this promotion has been a success. What makes it resonate with your target audience?

Music is a compelling part of Hispanic consumer’s lifestyle, which is heightened with 5 because it’s the gum with the flavor innovations that stimulate the senses. We designed the Vive tu Música with 5 competition to engage consumers by connecting with them on a physical, emotional, and cultural level.

This year, Wrigley invites selected bands to compete for a place in the finale concert on the new Vive tu Música with 5 reality TV show. Tell us about that.

Every year the program grew tremendously and this year Wrigley dialed up consumer engagement by partnering with LATV to develop the Vive tu Música with 5 Reality TV Show. This adds a new dimension to the program by putting the musicians to the test with a variety of musical challenges.

During the Grand Finale concert, a panel of celebrity judges will decide who will be the ultimate winners. As part of the grand prize, the winning band will perform at the LATV En Concierto, receive a private professional photo shoot, an opportunity to showcase their music before industry panelists, have their production costs covered as well as win a gift card for new music equipment.

We believe this is an excellent opportunity to reach consumers and help unsigned musicians showcase their skills on a national level. Given the success of the program, Wrigley added the Vive tu Música with 5 Reality TV Show to encourage new talent to take part in the competition.

The Vive Tu Música website, vivetumusica5.com, provides a central location for musicians and bands to upload their video/audio demos as well as a place for music fans to vote for the best contestants. How does your digital platform connect the other components of this Vive Tu Música promotion? How does it fit into a 360 degree plan?

Music represents a passion point for Hispanics. It’s an intrinsic part of Hispanic life, part of every festivity and family gathering. Online and social media also represents a major part of young bicultural Hispanics lives, so engaging them through these platforms made perfect sense. We incorporated digital into Vive tu Música with 5 to connect with Hispanic youth and bring an exciting energy to the competition. In addition, we wanted to recognize contributions to the Latin music community.

In terms of the details, the program kicked-off March 14 where contestants had the opportunity to upload their video demos onto vivetumusica5.com to enter the contest. The voting phase runs until May 1 then consumers have a chance to vote online to select the ten top finalists that will compete for a place in the finale concert on the new Vive tu Música with 5 reality TV show on LATV. We will select five bands to proceed to the Grand Finale concert on August 11 at the Club Nokia in Los Angeles to perform alongside the popular Mexican band Belanova. Consumers who vote for their favorite musicians will be entered into a sweepstakes for a trip for two to attend the Grand Finale.