Top Languages on the Internet vs. Top 10 Languages by Population

Compare these two lists (top languages on the Internet versus the top languages by population) and you’ll see an interesting trend. We all know that English is by far the most commonly used 2nd language, for business or leisure. That is reflected here in the “Top Language on the Internet.” English is #1 by a long shot followed by Mandarin and Spanish. 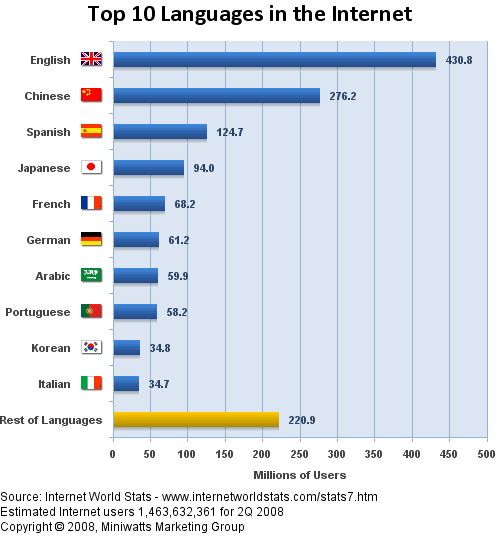 But take a look at this list of the top ranking languages by native speakers and you see a totally different story. Spanish and Mandarin are listed above English.

Where are computer and mobile phone prices going? Every year, their prices fall, according to Moore’s Law, thereby enabling more and more low-income global citizens to access, search and use the Internet.

And where is Internet advertising going relative to media spending overall? Internet advertising represents 26% of all media investment in the UK, about 14% in the U.S., 8% in Spain, and around 2-3% in Mexico and the other Spanish-language countries of Latin America. With advertisers looking for more measurable and optimizable media, the increase of Internet ad spending is almost a sure thing, especially in markets like Mexico where adoption by media buyers lags behind markets like the UK and US. This of course is the big incentive for publishers to produce more content online.

So what will the top languages on the Internet look like in five to ten years? Will it reflect the list of top natively spoken languages? Would that make English #3 behind Mandarin and Spanish?