TEDx Speaker Combats INFObesity in New Book “Got Your Attention?” 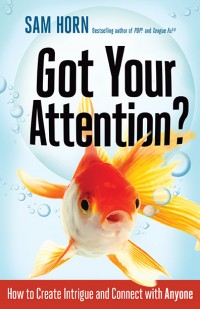 Did you know that goldfish have a longer attention span than most Americans? Harvard Business School historian Nancy Koehn found that the average American’s attention span in 2013 was about 8 seconds, down from 12 seconds in 2000. In contrast, the average attention of a goldfish is 9 seconds.

As this statistic indicates, many of us may suffer from “INFObesity,” or the deluge of information that threatens to mentally drown us, all day, every day. Email, Twitter updates and “big data” can easily turn into “TMI” (Too Much Information) or “Analysis Paralysis.” Author, speaker and consultant Sam Horn coined the term “INFObesity” to capture the zeitgeist and boil down the feeling into a single word.

Shares
Whether we are job seekers, authors pitching a manuscript, salesmen, or simply trying to convince someone of our big idea, we need to ask ourselves one question in the current environment: How can we gain the attention of decision makers quickly? That is why Horn wrote her new book Got Your Attention? How to Create Intrigue and Connect with Anyone.

As an example, in her TEDx talk, Horn shares a painful story of an author at the Maui Writers Conference who missed her chance to capture the attention of a book agent (after spending three years writing it) only because she could not summarize it into a brief pitch. And I am sure that many of you, like me, have listened to presentations that rambled on where presenters stumbled over slides or took 10 minutes to explain something that otherwise could have become a concise story.

To solve this challenge, Horn suggests creating mutually rewarding conversations with engaging questions. In other words, follow the advice of the novelist E.M. Forrester: “Only connect.”

She boils her insights down into an eight-step process, which spells: I.N.T.R.I.G.U.E

I = INTRO: Open with an Intro that has people at hello

N = NEW: Keep current and create the next new thing

T = TIME-EFFICIENT: Win trust by being time-efficient; Keep it brief, or they’ll give you grief

R = REPEATABLE: If people can’t repeat it, they didn’t get it

U = USEFUL: If it isn’t actionable, it isn’t useful

“The goal of INTRIGUE is not to control or manipulate people to do what you want them to do. It is to provide action options that give people the freedom to decide for themselves how they want to proceed or follow up because they want to, not because they’re being told to.”

I met Sam at a conference a few years back and bought a copy of her book POP! Create the Perfect Pitch, Title, and Tagline for Anything. I utilized her exercises from POP! as a means for coming up with the title of my first book, Latino Link, utilizing alliterative words in combining two concepts, which later became the name of my consulting company.

Over the years, I kept finding myself recommending POP! to friends and colleagues in marketing. While I have given away (or forgotten about) many other business and marketing books that I read, I have held onto my copy of POP! So, when Sam’s new book came out, I was excited to read it…and review it.

I am glad I did. I found the book easy-to-read with pithy quotes at the beginning of each chapter. I especially liked the examples from her clients at Intrigue Agency and the story of how Sting overcame writers block.

In conclusion, the reason why I like Sam Horn’s book isn’t because it helps me become a better presenter (which it does), but rather it makes me a better listener and human being. Sam dedicates her book to Dale Carnegie, author of How to Win Friends and Influence People, who said, “We can make more friends in two months by becoming interested in other people, than we can in two years by trying to get people interested in us.”

To learn more, watch Sam Horn’s presentation at TEDxBethesdaWomen on “How to Create Interest and Connect with Anyone” here:

This book review also appeared on The Huffington Post.