In Honor of Veteran’s Day, the Story of Djakaria Konate, Serving Our Country and Those in Need 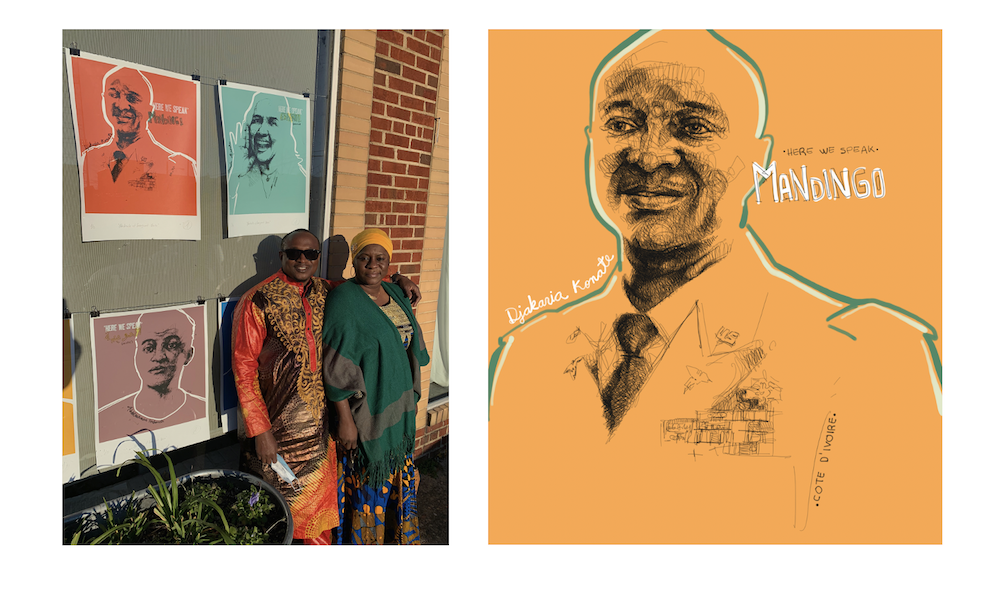 In honor of Veteran’s Day (November 11), I proudly share the story of Djakaria Konate, who I wrote about in the series PORTRAITS OF IMMIGRANT VOICES, a project I worked on with artist Alfonso Pérez. Djakaria’s story inspired and surprised me, regarding how someone who isn’t even born in the USA can dedicate himself to defending our country…for 26 years!

Thank you to America’s veterans and to our sponsors of the exhibit, Virginia Humanities, Studio Two Three, and the City of Richmond’s Office of Immigrant and Refugee Engagement for enabling us to highlight the diversity of backgrounds and perspectives in Richmond, Virginia. Read more stories at RVAStrong.org/portraits.

Djakaria Konate retired in 2019 as a U.S. Army Major after 26 years of active service. But he wasn’t born in America nor did he grow up speaking English. He was born and raised in Côte d’Ivoire on the West coast of Africa, a country which had been a French colony for many years.

Djakaria grew up speaking French and Mandingo, a language of the Mandinka or Mandingo people, an ethnic group spread across Western Africa. “The Mandingo are a very large tribe in Africa, opposed to white colonization,” says Djakaria. “Mandingos are farmers and also traders. They are people of great integrity. They love other people. They’re welcoming. So here in America, I want to bring that same spirit.”

He started learning English in middle school but didn’t become fluent in English until he came to New York City as an exchange student in 1989. Djakaria attended New York City College of Technology, taking English as a second language (ESL) classes as well as requirements for his associate degree. He juggled a variety of jobs to pay his way through school: hotel housekeeping, messenger and yellow cab driver.

Meeting a Recruiter from the U.S. Army

One day on campus, Djakaria met an army recruiter who asked him how he was paying for school. The recruiter explained that the U.S. Army could pay for school, provide a salary, and provide a path to eventually obtain U.S. citizenship. Djakaria thought of this as a win-win situation. “I can serve my host country, I can go to school for free and I love traveling,” he said. Djakaria took the U.S. army entrance exam and passed. He signed up for the military and after he finished that semester, in January 1993, he left New York City to attend basic training in Missouri.

He has travelled across the U.S. and the world and been stationed in Missouri, Texas, Colorado, South Korea, North Carolina, and at the National Training Center in the Moabi Desert in California. In 2012, he was deployed to Afghanistan during Operation Enduring Freedom. Eventually, he settled down and established his family near Ft. Lee, Virginia, in 2000. He continued taking classes in the evenings while serving in the military and raising five children with his wife, who he met in New York and is also from Côte d’Ivoire.

New missions or new training sessions often interrupted his studies. “It took me almost five years just to get an associate degree because I was constantly moving,” says Djakaria. “And then, when I went to another place, I had to start all over again. Some of my credits weren’t accepted.” But once he completed his associate degree, he started taking science classes at VCU and participated in the Enlisted Commissioning Program (AECP), which allows active-duty soldiers to finish up to 24 months of nursing school while retaining their rank, grade, and military benefits.

Today, even though Djakaria is retired from the military, he still works part-time in the surgical department at Chippenham Hospital and also volunteers with the Medical Reserve Corps, part of the Virginia Department of Health. He also founded a non-profit called “Acces et Mobilite’ pour Tous,” which means “Access and Mobility for All” in French, to collect crutches and wheelchairs to ship back to Africa for people who have lost the use of their limbs. “A wheelchair can make a big difference to people who have been paralyzed,” says Djakaria. He also serves as the chair of the health committee for the African Community Network of Greater Richmond, a nonprofit organization, which builds bridges for and is the voice for the African immigrant community.

About overcoming racism in the United States, Djakaria says, “Even though I’ve been in this country forever, I still have that French accent. I’m black. I never changed my name. I had to work twice as hard, discipline myself twice as hard, walk on eggshells to make sure I kept everything in line. I always look towards the end of the tunnel, not the journey in between. I have a goal that I want to achieve. I didn’t let any of that deter me from my progress.”

His Message to the People of Virginia

“Immigrants are not criminals. We are hardworking. We pay our taxes like everybody else. We serve the country in every aspect. I know many immigrants serving in harm’s way in the military and also in healthcare, doing great things for this country. Virginia needs to increase services for immigrants, make them feel welcome, provide language interpretation services, and make education accessible for immigrants.”

Left: Djakaria and his wife standing next to his portrait at the opening exhibit at Studio Two Three. // Right: Djakaria’s portrait by artist Alfonso Pérez Acosta.