Immigrating for the American Dream 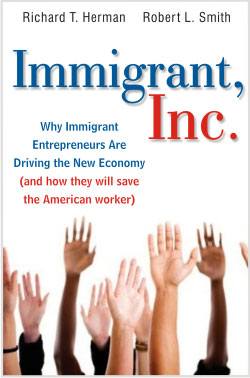 Immigrants have sailed to American shores for centuries to escape persecution, create economic opportunity, and pursue the “American Dream.” They bring an extraordinary hunger to succeed and a strong belief in our flexible economic system. Some of our country’s largest companies were founded by immigrants including Proctor & Gamble, Intel, Pfizer, eBay, Yahoo! and Google. Collectively, these businesses generated over $235 billion in 2010 revenues and employed 375,800 people globally.

Who are today’s immigrant entrepreneurs and how do they create opportunity for themselves, their employees, and their respective communities? Do their stories live up to the “American Dream”? The founder of the HuffingtonPost.com – Arianna Huffington – provides a perfect example of the immigrant entrepreneur. She moved from her native Greece to England and then on to the U.S. to become a media mogul, eventually selling her site to Aol for $315 million dollars.

Two new books answer those questions from distinctly different viewpoints, providing key insights for the immigration debate. One highlights the benefits that immigrant entrepreneurs bring to the U.S. while the other points out the challenges that minority and female entrepreneurs face. 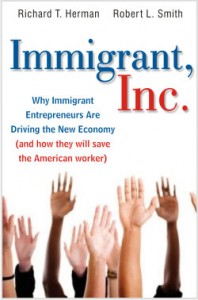 Shares
The first book, Immigrant, Inc., tells the stories of successful immigrant entrepreneurs, mostly from a technology start-up perspective. It analyzes the positive economic impact that immigrants have had on communities like Philadelphia, which actively recruits immigrants, as well as states like California that have drawn immigrants for years. Richard Herman, an immigration lawyer, and Robert Smith, a journalist who covers immigration issues for The Plain Dealer, document the beginnings of large companies like Google and PayPal to lesser-known companies like A123systems, a manufacturer of lithium-ion batteries, and Xunlight, a maker of flexible solar panels, all started by immigrants. They describe these companies’ unique culture as:

Immigrant, Inc. is a culture of entrepreneurship and self-reliance built around a set of simple, powerful concepts: relentless preparation, lifelong learning, constant vigilance and exploration of opportunity (no matter how remote), a willingness to take risks, and a deep love and respect for American ideals like thrift and earnestness.

In the appendix of Immigrant, Inc., a 2008 study by the Small Business Administration, shows that Mexican immigrants represent the largest share of revenue among immigrant entrepreneur groups, probably because of the large volume of the Mexican-American population and the corresponding number of entrepreneurs. Yet, at the same time, Mexican-American business owners reported one of the lowest averages among all ethnic groups at $26,990 in annual revenues per owner. The second book explains why this may be the case.

Shares
In The New Entrepreneurs, Professor Zulema Valdez of Texas A&M University, takes an academic approach in dissecting “How race, class, and gender shape American enterprise,” as her subtitle states. Her research focuses on interviews of entrepreneurs, mostly restaurateurs, in the Houston area. Sadly but not surprisingly, her book shows how women and minority entrepreneurs face greater challenges in establishing their businesses, especially when they come from lower socio-economic classes. She finds that “middle-class Latinos are favorably predisposed to successful business ownership, when compared to working-class or poor Latinos.”

Some of the entrepreneurs she interviewed started businesses to find financial freedom while in other cases they started businesses to escape undesirable or even dangerous work conditions. Others hope to move beyond “blocked mobility” at work and become their own boss. One of the entrepreneurs, Señora León, says, “I came from people, like my mom, who had businesses…. When I was a child I saw her and her clothes shop; you carry that with you throughout your life.”

Her research concludes that, “for most Latino/a and Black entrepreneurs … the American dream remains, at best, only partially fulfilled. Although entrepreneurialism holds the promise of “making it” in America, differences persist among Whites, Latino/as, and Blacks.” Thus, “White middle-class and male entrepreneurs garner the greatest economic rewards in enterprise.”

Even with all of the challenges that lower-income women immigrants find, some of Professor Valdez’ interviewees achieve the American Dream, as Concepción Cortez describes here:

“I came here with one single piece of underwear just like everybody else. … I knew I liked the good life. I wanted a car; I wanted good clothes. So, I worked day and night. After three to four months after coming to this country, I had a brand new car. …. I came to work and fight because I wanted to improve myself. I wanted everything that was available, I was in the country of opportunity, but I also had to work. Why don’t others do it? Because they don’t want to. Wouldn’t you agree?”

What do you think? What immigrant entrepreneurs do you know that have achieved the “America Dream? Can the entrepreneurship perspective change the immigration debate? Please respond in the comments section below or contact me on Twitter @joekutchera

Watch this video of Richard Herman about his book Immigrant, Inc.