How NOT to Manage Multi-Lingual Customers

This article originally appeared on FoxNews.com.

I recently flew on the Mexican discount airline, Volaris, and had an experience that highlights how not to manage both customer service and social media among an international, multi-lingual audience. Allow me to explain the details of what happened, and conclude with six lessons on managing multi-lingual and international customer service and social media.

My flight to Guadalajara was scheduled to leave from Mexico City at 6:45AM on May 28th. I printed my boarding pass earlier that weekend and arrived at the airport one hour before my flight. I walked through security and waited in “Waiting Area B” as the departure screens instructed me to do. On previous flights at Mexico City’s airport (with Aeromexico and United), I have often waited up until 15 minutes before my flight to see the departure screens finally announce a gate number, usually just along side the waiting area.

I waited in the waiting area until 10 minutes before my flight was scheduled to depart, at which time I asked Volaris’ customer service person about the gate number. She told me that she had made numerous announcements and that the flight was already leaving. The loudspeaker system in waiting area at Mexico City’s airport is of poor quality, and so, it is difficult to hear anything. In addition, because I am not a native Spanish speaker, I often rely on visual rather than audio information.

I asked the customer service person, Gabriela, if she could call the gate to hold the plane one minute, until I arrived. No, she said. So, I ran to gate number 19 hoping that the gate would still be open. I arrived at 6:40 (5 minutes before the flight was supposed to depart) to find that the doors had already been closed and that I would need to take the following flight at 9:30.

I walked back to speak with Gabriela about changing my ticket for the 9:30 flight. Her attitude clearly communicated she didn’t care. She explained that she couldn’t do anything and that I would need to leave the boarding area, go back out to the ticketing desk and purchase another ticket. I was flabbergasted. As I spoke with her, two young Mexican men approached the customer service desk, outraged with an identical experience as mine. Sebastian and Hugo couldn’t believe what had happened.

She repeated herself saying that she had made numerous announcements about the gate number. But, she had never bothered calling us by name over the loudspeaker system. Gabriela gave them the same instructions as she had given me, indifferent to our problem. She said that Volaris was not responsible for the information that appeared on the departure screens: “That is the responsibility of this airport.”

Both Sebastian and Hugo, like me, had printed their boarding tickets online. Volaris offers its customers a $100 Pesos discount on their next flight if they check in online.  So, all three of us, with our pre-printed boarding passes, had walked through security and followed the instructions on the departure screens to wait in “Waiting Area B.”

Meanwhile, Gabriela told us that the customers that had checked in at the ticketing desk that morning had received tickets with the boarding gate number already on them! Ironically, we three Internet-savvy passengers were actually penalized for printing out our boarding passes in advance. We weren’t given the information that the other passengers had received by checking in at the ticketing desk.

After arguing with her for about 15 minutes, Gabriela finally told us to talk to the manager, Mauricio Mishua, downstairs.  Sebastian, Hugo, and I walked back through security and out to the ticketing area. We asked for Mr. Mishua at Volaris’ ticketing area. The ticketing agent told us that he was at breakfast. While she was noticeably more diplomatic than Gabriela, she told us the same thing as Gabriela had. We would unfortunately need to buy another ticket to fly to Guadalajara.

Sebastian and Hugo continued arguing with the ticketing agent, presumably waiting for Mr. Mishua. Instead, I decided to buy a one-way ticket and save my emotional energy for work that day. Mr. Mishua never returned from his “breakfast.” Suddenly, the cheapest airline ticket from Mexico City to Guadalajara became the most expensive one with my “new” $121 one-way ticket.

When I arrived at my client’s office later that morning, I complained on Twitter. My first post read “Wow, terrible customer service from @ViajaVolaris (Mexican Airline). Don’t try printing your boarding passes at home…or finding your gate.” My second post read, “@ViajaVolaris (Mexican Airline) could learn something from @billgates “your most unhappy customers are your greatest source of learning.”

To that second post, I received an auto-response in Spanish that read, “#UnaAppQue te permita comprar boletos y obtener descuentos que nadie más tiene #VolarisApp disponible en iTunes. Ya la descargaste?” This roughly translates as, “#AnAppThat allows you to buy your plane tickets and obtain tickets that no one else will have access to. #VolarisApp available on iTunes. Did you download it?”

I couldn’t believe that not only did Volaris not listen to my complaint, but it also responded in another language, trying to sell me instead. Clearly, Volaris does not use Twitter (or presumably its Facebook page or other social media channels) to listen to its customers.

See here for a screen shot of my Twitter feed from the morning of May 28. 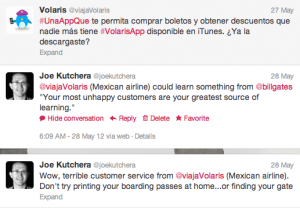 Volaris’ failure to use its social media channels correctly provides us with six key lessons on how marketers ought to manage multi-lingual customers: