For over 20 years, salsa has outsold ketchup in the United States, as first reported in the New York Times in 1992. Hispanic foods and flavors continue to have an increasingly important impact on the diets of all Americans, not just Hispanics.

If we look at the search statistics on Google Trends, we see that search volume for the Mexican-American food items “tacos” and “burrito” have grown dramatically in the past eight years:

Not surprisingly, we can see that states with large Hispanic populations, like California and Texas, represent the heaviest search volume for terms that include the word “taco.”

More specifically, we can see from this list on Google Trends all of the variations of search terms that include the word “taco,” of which “fish taco” is the most popular. 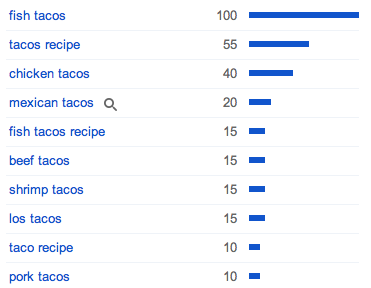 Eight years ago, “fish tacos” were hard to find. Today you see them on menus far more often and even some restaurant chains, like Wahoo’s Fish Tacos, position themselves around this specialty.

In the years ahead, the market research company Packaged Facts predicts that the Hispanic food and beverage market is expected to grow aggressively as companies pump more dollars into innovation around Mexican flavors and Hispanic marketing.

Ironically, even though there is a lot of debate around the immigration and legalization of Latino immigrants in the U.S., Gustavo Arellano, the nationally syndicated columnist of Ask a Mexican!, says “The biggest fans of Mexican food in this country [the United States] hasn’t been Mexicans, it has been Americans” in the following interview:

Arellano explores the history of Mexican food and how it has become as popular as pizza in his insightful and entertaining new book Taco USA: How Mexican Food Conquered America.